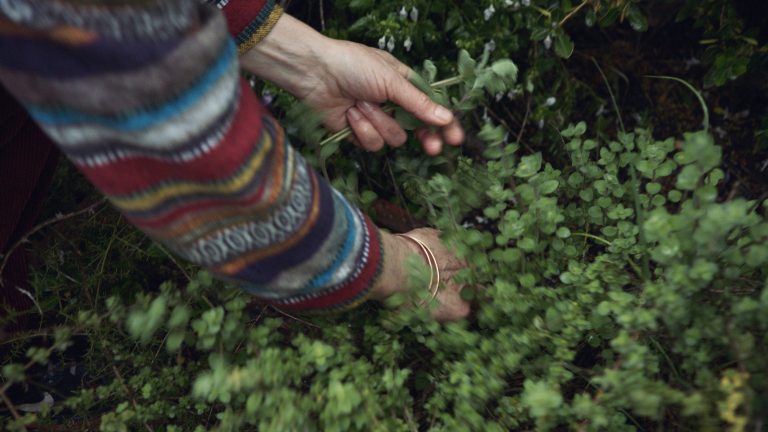 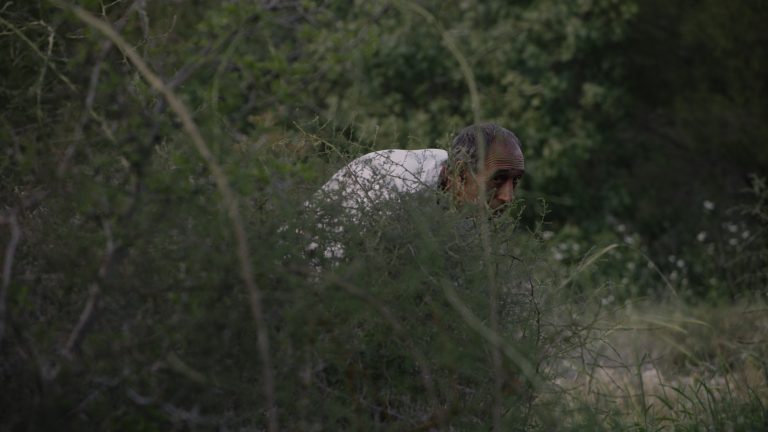 In 1977 Israel banned the gathering of wild za’atar, or thyme, an herb essential to Palestinian and Levantine cuisine. In 2005 it did the same with ‘akkoub, a wild-growing artichoke-like plant that is highly sought after on Palestinian tables and is a delicacy in other parts of the Levant as well. While harvesting these wild herbs is an essential element of Palestinian culture and cuisine—and has been for generations—the Israeli government restricted their gathering due to concerns over conservation. It argued that foraging contributes to the decimation of these plant populations, despite the fact that wild za’atar and ‘akkoub flourished for centuries under such practices. In recent years, however, the plants have flourished less; while this is in part the result of overpicking, it is primarily caused by the detrimental effects of urbanisation and climate change. Jumana Manna’s newest film, Foragers (2022), explores the resulting conflict between the Israel Nature and Parks Authority and Palestinian foragers—between Indigenous knowledge and settler- colonial knowledge—and the debate around what is made extinct, what gets to live on, and who gets to decide. More broadly, the film interrogates the rationality of penalising and criminalising individuals, or an entire population, for minor offences related to the environment—particularly in light of a much wider, more complex struggle.

What unfolds in Foragers is a sort of chase movie between the Israel Nature and Parks Authority and everyday pickers, replete with moments of comedy. In these instances, scientific knowledge and information become weaponised in the legal realm through various modes of enforcement— surveillance, large fines, recurring court cases, and potential imprisonment—producing a type of absurdity that is conveyed through the film’s semi-scripted narrative, using actors and nonactors to tell stories drawn from personal experience, archival footage, legal documents, and fictional scenarios. The Palestinian foragers depicted in the film resist Israel’s foraging bans; even as they are accused of committing criminal acts and ‘dealing’ large quantities of the herbs, they keep searching for and gathering za’atar and ‘akkoub. They do so to make their meals, to be on the land, to make money, and to continue a tradition that state powers wish to end under the guise of environmental protection and other restrictions on the land. The contradictory logic becomes clear in a scene where an apprehended forager is asked to dump the herbs on the ground as a form of punishment—in essence, wasting what is supposedly being preserved.

Foragers opens with a man slashing the tires of a parked Israel Nature and Parks Authority jeep as patrollers scan the fields for foragers. Such small acts of nonviolent resistance may seem futile against state agencies; however, as they accumulate through the film, they become essential modes for the foragers to assert their sovereignty. The legal ramifications of these acts are articulated in the stagings of court cases interspersed throughout the film, which are based on actual cases that Manna studied in collaboration with legal scholar Rabea Eghbariah. The confusion, the miscommunications, and the foragers’ stubborn refusal to admit to doing anything wrong allow demoralising situations to transcend into something like farce. Humor is a salve, a mode of refusal, and a tool for exposing truths. In the film, the insistent stubbornness of the elderly herb pickers becomes a charming means of rebellion.

Manna enlisted her own elder family members into the film, including relatives who maintain deep culinary connections to the land. She described her own family fridge:

A multitude of edible plants grow in this valley, as in much of the hilly landscape of Palestine/Israel. My parents, who forage frequently, both rave and complain about how quickly the fridge gets filled with greens that they have to wash, chop, and cook—before even going to the market. Between the months of February and May, they collect the following plants: khubeizeh (mallow), shomar (fennel), za’atar (thyme), ‘elt or hindbeh (dandelion), hummeid (bitter dock), loof (black calla), wara’ zquiqiah or tutu (ivy-leaved cyclamen), halayoon (wild asparagus), and the much-celebrated ‘akkoub (gundelia).

In Manna’s take on the foragers, a certain ecstasy of being on the land, of searching and finding what you are looking for, becomes palpable, as does the foragers’ feeling of harmony with the environment and satisfaction over their self-sufficiency. That picking the herbs is illicit perhaps even amplifies their joy and satisfaction in foraging. As one elderly forager proclaims in defiance, ‘I’ll also be caught in 2050 with my children and grandchildren.’

While wild foraging is restricted, Israeli plantations grow and sell the plants, mostly to Palestinian consumers at a profit. The cultivation of these herbs speaks to the role of capitalism, operating hand in hand with colonialism, as an incentive for placing obstacles between the people and the land. Segments of archival television footage within the film point to a longer-term cultural strategy centered around the control and appropriation of the plants and their traditions, making it clear that, at times, access to the land and its benefits is about not only sustenance or preservation, but also staking claims on the soil itself.

As Foragers progresses, the land becomes its central character. Between the foraging, the chases, and the court cases, the camera studies the landscape, allowing its qualities to open up into the hills, fields, rocks, sky, trees, water, animals, and birds. Time expands to show the place as vast, with tall grasses, flocks of sheep, ruins of stone houses, and shores of the Sea of Galilee. In the end, the wildness of nature takes over, itself a form of resistance.